Skip to Main Content
Back to BIDMAS rule
Sale!

The BIDMAS rule book 1 and 2

BIDMAS or BODMAS is an acronym used to help pupils remember the correct order to complete mathematical calculations, also called ‘order of operations’.

When pupils work with numbers with more than two different operands or algebraic expressions it is very important that they learn and follow the BIDMAS rule. The consequences of ignoring this fact leads to an incorrect answer. The two BIDMAS rule workbooks are developed to support the pupil learn to calculate using this rule.

Pupils should be taught the order of operations using all four operations just after they can confidently tackle directed numbers and before they begin to learn Algebra.

The pupils upon completing this workbook will be able to:

This workbook will help pupil to build the knowledge and skills expected to match the new National Curriculum for years 7. Although in reality many pupils in years 8, 9 and taking GCSE maths at a foundation level will benefit from working through this workbook as a refresher.

The Alphareach BIDMAS workbooks makes explicit the meaning of the BIDMAS rule and emphasise the importance of it with examples. The workbooks give pupils model examples and further supports them by giving step by step guided instructions in how to calculate using the BIDMAS rule. This makes it easy for parent or teacher/tutor to support the learner.

There are plenty of practice examples for pupils to learn the concept and apply them using graded examples in order of difficulty.

The mathematical tasks in these workbooks are based on the variation theory. The tasks are set in a variety of contexts, with multiple representations that enable the pupils to deepen their understanding of the concept of the BIBMAS rule with plenty of follow up sums to develop their skill and improve confidence. 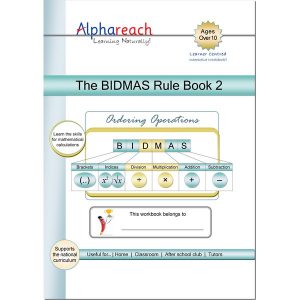 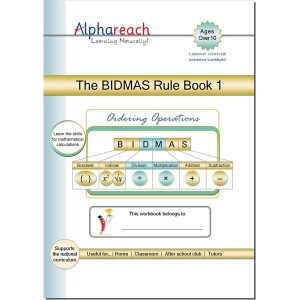